Although rain kept performers and spectators indoors for the first time since its inception, events unfolded without a hitch at the Indiana Convention Center.

The competitive event allowed percussion ensembles to showcase their creativity while going head-to-head in a tournament-style bracket, with the overall winner in Indianapolis crowned the 2016 DrumLine Battle Champion.

DrumLine Battle has seen significant growth since its founding in 2013, and during the summer of 2016, the event expanded even further as part of the rebranded SoundSport International Music & Food Festival presented by Motif Music.

“I’m blown away to see the interest and how far around the world it has grown—watching a group from Hong Kong and another from Shenzhen, China as well as groups from Canada and all across the United States performing together,” said John DeNovi, Drum Corps International Director of Global Business Development. “Drums are what bring us together … we’re all speaking the same language.” 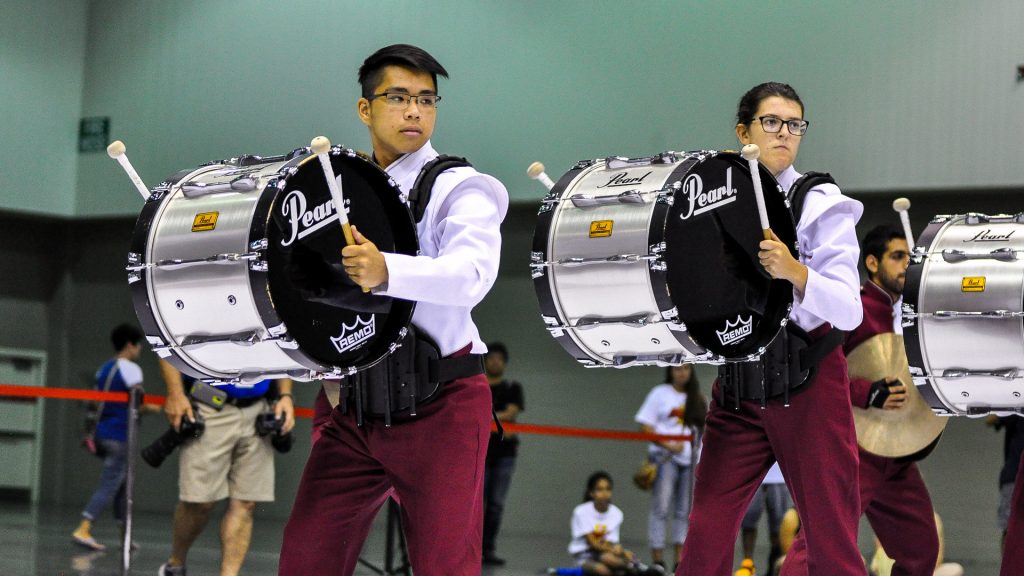 Hailing all the way from Hamilton, Ontario, McMaster Marching Band member Erica Cheyne said “The best part about being here is definitely playing while you spectate, and seeing those groups from around the world.”

Cheyne said that despite different backgrounds, she and her fellow members have easily made friends with other International groups and have enjoyed their third year doing so in Indianapolis.

Mixed with the roar of the drums, several different languages could be heard mingling among spectators, who gathered to partake in an interactive drum circle during a break from competition.

Lead for the second year in a row by the energetic Ed Gaus from Bongo Boy Music School in Castleton, Indiana, fans got to put their own rhythm skills to the test. Sponsored by REMO, the activity aims to bring a new level of appreciation for that which unfolds during DrumLine Battle competition.

“It’s all for the community, for amateurs who have never hit a drum,” Gaus said “You don’t have to know how to play to share your grove and share your rhythm and jam.”

Each DrumLine Battle matchup is evaluated by three judges who focus on presentation, drumming and the overall battle. Technique and precision are considered important only as a tool to entertain the audience, whose reaction can have an influence over the final decision.

The overall DrumLine Battle Grand Champion for the day was last year’s victor 7th Regiment, which threw down with Pegasus Vanguard from Hong Kong in the final round.

Designed to be held year-round, DrumLine Battle events will continue throughout the fall and winter, with the next battle scheduled for September 17 as part of the 2016 Drum Corps United Kingdom Championships in Widnes, Cheshire, England.