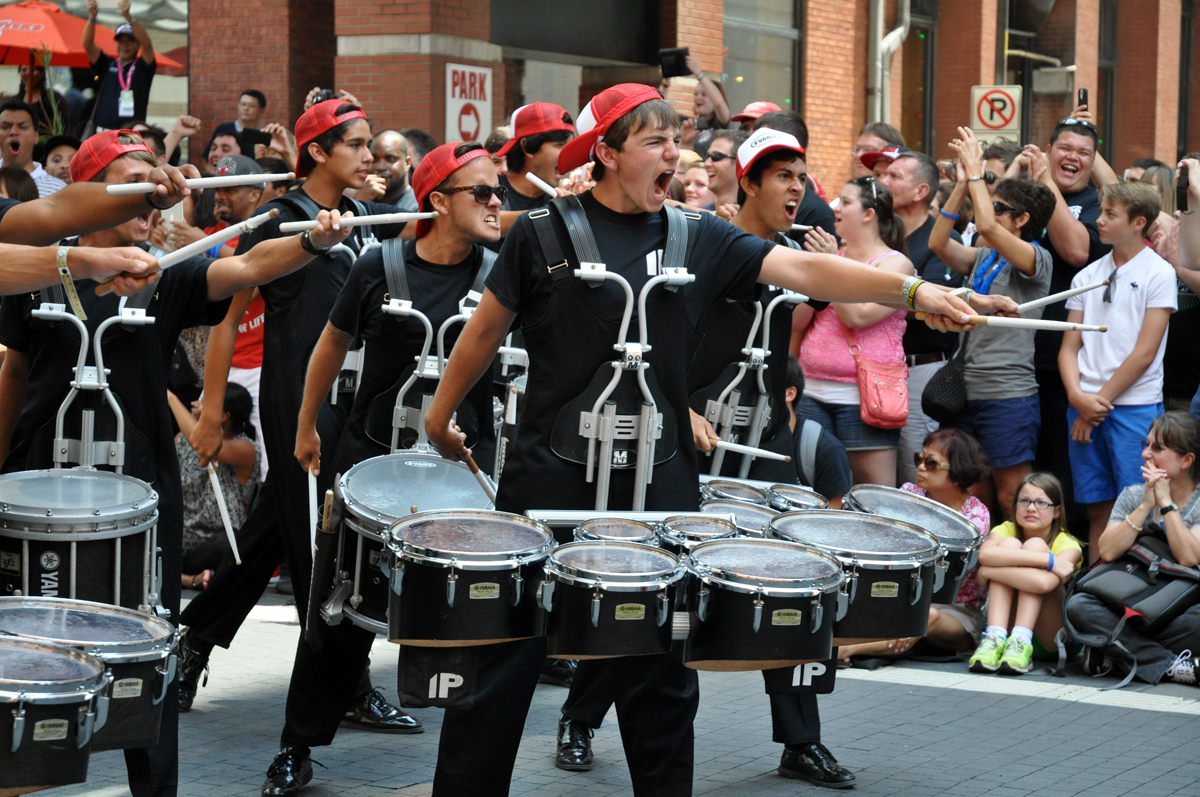 DrumLine Battle is Drum Corps International’s new and exciting competitive performance opportunity, which allows drum lines of any age, size and makeup to face off, each group putting together a 90-120 second performance in a confined “battleground” environment.

The DrumLine Battle on Georgia Street featured a number of non-finalist drum corps and other groups, competing using a tournament-style bracket to determine the winner.

One of the performing ensembles, E-Sam Drumline, came all the way from Thailand to participate. The group also had the opportunity to perform for crowds at Lucas Oil Stadium at the end of the Prelims competition on Aug. 8 and also at the start of the Finals on Aug. 10.

Tsawtzsai, a snare drummer for E-Sarn, said he was happy to represent his country in a DCI competition. After months of preparation and practices running as late as midnight, E-Sarn could not wait to get to Indianapolis for its one-week visit to the United States.

“My favorite part of the U.S. is Lucas Oil Stadium,” Tsawtzsai said. “We get to watch three days of DCI there.” 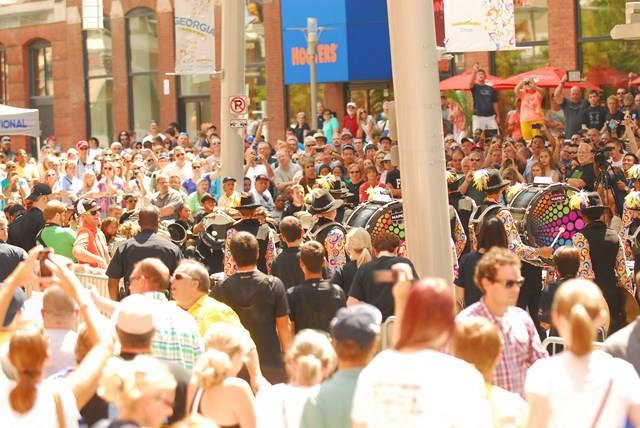 On Georgia Street, music fans young and old stopped by the first-ever event and cheered on their favorite drum lines and other ensembles like Music City who brought its entire corps to fit in one final performance of the summer of 2013.

Yvonne Elker, a Colts Drum & Bugle Corps fan from Minnesota, chose to sit at a table on the pedestrian-friendly Georgia Street and enjoy the sights and sounds around her.

“My family and I have been enjoying ourselves, talking to Colts kids and listening to the music,” Elker said. “We loved seeing the Colts cymbal line performing down the street.”

“It’s something new that hasn’t really been done before,” Fish said.”When two drum lines get to face each other without horns or guard or anything, it’s all about percussion. It’s a cool experience”

A Center Grove High School snare drummer stares down his E-Sarn competitior
during the final round of DrumLine Battle competition to determine the winner.

E-Sarn won all of its head-to-head battles (see bracket below), earning recognition as the first-ever DrumLine Battle Champion. Runners up were the members of the Center Grove High School Drum Line from local Greenwood, Ind., the sole high school group to participate in the competition.

After all of the DrumLine Battle action wrapped up on Georgia Street, another of Drum Corps International’s new performance ventures, SoundSport, also took the stage on Finals Day.

SoundSport gives groups of 50 members or less of any age and instrumentation the opportunity to perform in an intense, up-close setting. Three groups including Jersey Surf and the Surftones (a small cross-section of the entire drum corps), the Glassmen Alumni and Star United (winners of seven straight Drum Corps Associates Mini Corps titles), all performed.