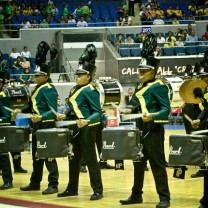 The FEU Drum and Bugle Corps was organized in the 1930′s by FEU founder Dr. Nicanor Reyes. Its purpose was to perform for the school during the UAAP Season and to participate in the various area festivals. The DBC reorganized for the 2005 season, competed successfully and was declared as the over-all champion at the first ever Cali Beatline Competition, a marching band competition held at the Aliw Theater, PICC Complex in December 2005. They won 1st Place again at the Tejeros Makati Drum and Bugle Competition held in May 2009, and 1ST Runner Up in the 1st National Drum and Bugle Competition held on April 19, 2009 in Luneta Park. The DBC and FDC won First Place in the Q Filipino Festival Dance Competition to Celebrate the 400th anniversary of the University of Sto. Tomas in 2011. DBC had  three (3) days of summer workshop training  in  July, 2011 with Jacob Sawyer, an alumnus of the United States’ Blue Stars Drum and Bugle Corps. Jacob focused on marching, posture and wrap up exercises. In November, 2012 seven (7) members and the two (2) Artistic Directors went to Yogyakarta, Indonesia to attend the Indonesia Band Camp. The FEU DBC Drumline is under the Artistic Directorship of John Carlo Obrero with band consultants Mr. Charlie Dolenheimer, Jan Michael Wycoco and Jacob Sawyer.