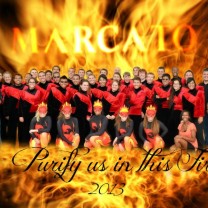 Marcato is an organization dedicated to youth education in the arts. We offer SW Florida both performance and educational opportunities in the pageantry arts. Our members will learn the craft of indoor percussion performance, indoor guard performance, and develop the skills necessary to perform at a supremely high level in front of thousands of spectators. Marcato rehearses in Fort Myers Beach, Florida

Marcato was founded in the fall of 2009 to promote professional-grade pageantry education in SW Florida. In 2010, Marcato earned a regional championship.

Marcato staff is fully volunteer, comprised of music educators, designers, and administrators dedicated to 50-80 members. Members have come from all over Florida to perform with us.

The Marcato Ensembles are competitive ensembles, participating in events hosted regionally by FFCC and internationally by Winter Guard International (WGI) Sport of the Arts and DrumLine Battle by DCI. These events combine music and movement into a theatrical production performed for audiences and adjudicators. Marcato has been nationally and regionally recognized in various ways during every season of its existence and has received a gold medal in Regional Championships.