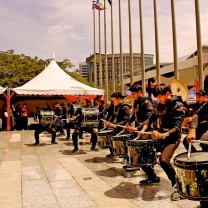 Batteryheadz Percussion was formed in May 2010 by young, aspiring percussionists consisting of both students and professionals from different backgrounds. Musicians, educators, designers, accountants, athletes and many more have joined hands to form the group as a platform for members to express their undying passion and love for music and performing arts through percussion.

Having only been established for a short period of time, Batteryheadz Percussion has already achieved prestigious awards. Some of mention are Champions of Drum Battle at the Hong Kong International Marching Band Competition 2011 and Champions of Drum Battle at the World Championship of Marching Show Bands 2011. Through its establishment, Batteryheadz Percussion has been constantly dedicated in its services and music towards the development of marching percussion activity and highlighting marching percussion music as a performing art entity in Malaysia. Batteryheadz Percussion are also very active in youth development through workshops and clinics in hopes of becoming an inspiration and role model for young students across Malaysia.